The membership roll of the Campaign now stands at over 100,000. From a start in 1971 when four blokes in a pub decided to do something about the poor state of beer in the UK and set up the “Campaign for the Revitalisation of Ale”, the campaign has grown into one of the largest consumer groups in Europe.

CAMRA is delighted to announce for the first time in their 38 year history that they have 100,000 members signed up to the organisation.

But how did it all happen?

CAMRA was founded in 1971 by Michael Hardman, Jim Makin, Graham Lees and Bill Mellor, when an idea of a campaign arose whilst they were bemoaning the state of British beer and pubs whilst on holiday in Ireland.

1973 – the word starts to spread…
Popularity for the then named ‘Campaign for the Revitalisation of Ale’ quickly grew, and by the end of 1973 the organisation boasted 5,000 members.

1976 – first major success…
In 1976, CAMRA campaigned for breweries to reveal the OG’s (Original Gravity) of their beers after they had initially refused. By testing the beers themselves, CAMRA published the OGs in the 1976 Good Beer Guide. It is now common practice for many breweries to promote the strength of the beer on promotional material and on pump-clips, helping consumers know what they are drinking.

The membership continued to grow following CAMRA’s success to persuade breweries such as Bateman’s of Lincolnshire not to close, despite some of the family wanting to sell up, and Fuller’s to reverse their decision to stop brewing real ale. Can you imagine a Fuller’s pub with no London Pride, ESB or Chiswick today?

In more recent times CAMRA has been delighted to see responsible adults being given the option to go for drink at a time that suits them. This decision was made following the campaign’s support for the new licensing laws that now allow pubs to stay open beyond the traditional 11pm closing time and all day on Sunday.

There are now approximately 700 breweries in Britain brewing more than 2,500 different real ales. Many of the new breweries that have started since 2002 have benefitted from Progressive Beer Duty, which CAMRA campaigned for, giving small brewers tax relief to help set up and grow their business. The variety of real ales now available for consumers to enjoy is probably CAMRA’s biggest success.

A big thanks to CAMRA’s volunteers!

Reaching the 100,000 members milestone and achieving so many campaign successes over nearly four decades would not have been possible without the dedicated CAMRA volunteers. It is estimated that more than 5,000 CAMRA volunteers give up their time to organise over 150 CAMRA beer festivals a year, survey pubs, write and distribute local newsletters, manage local branch websites, organise petitions to save local pubs and breweries, present pubs with awards for good practice and sit on local and national committees…. Plus much, much more!

To help celebrate the 100,000 landmark, CAMRA branches across the country will be raising a glass, or two, of real ale and organising their own events over the coming months to thank members for their support – so watch this space!

We still have more to do!

100,000 members is a great achievement but there are plenty more campaigns to win and the 200,000 member milestone is CAMRA’s next aim to give our organisation even more lobbying influence to campaign for consumer rights.

Why not join today?

If you are not currently a member and would like to join CAMRA, then there is a great membership offer available… Please click here to find out more about becoming a CAMRA member.

CAMRA would like to thank every member who has joined the organisation over the last 38 years! They couldn’t have achieved so much with out you.

Resurrected festival makes a great contribution in first attempt! Tony Egerton, who helped organise the event reports “After all bills paid a total […] 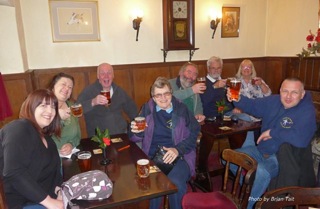 A year on from the great trip to Derby and the Dales, Rich arranged a more local event this year.  Branch Day […]

Although tickets did not sell out before the event there were very strong sales right up to and after the doors opened. This […]