An “ales by rail” trip report. Simon Palmer’s photo report about a recent trip to Bristol by his “beer club”.

Portland Coastguard C watch beer club recently had another outing and the chosen destination was Bristol. This is ideal as a beer based day out; its on a direct train route, the centre of Bristol has a multitude of real ale outlets all within walking distance and very importantly its easily “sold” to the other half as Bristol is a major shopping cenre!

Nigel Robson, Phil Chappell and I caught the 0811 train from Weymouth which arrived at Temple Meads at 1035; in good time to walk towards the city centre via Broadmead where there is an excellent café for a good stomach lining breakfast.

Crossing Broadmead we reached our first port of call. The Kings Head is a gem! Dating from the early 17 th century its narrow frontage has a bar at the front with a traditional snug towards the back of the building. The interior is totally unspoilt with glorious carved panelling and mirrors with original signage advertising “Claret, Hollands, Cordials, Mineral Waters and Cigars”. The beers on offer included Sharps Doom Bar and IPA, 6X and a wonderfully kept Bath Gem.

Our next stop was The Cornubia just round the corner in Temple Street. Completely surrounded by the glass and concrete jungle that is today’s Bristol the pub has been closed for a while but is now part of the Hidden estate. A very enthusiastic young manager presented the full range of Hidden ales; we enjoyed an excellent Spring.

From there on route to the city centre we passed the site of the Old Courage Bristol Brewery now in the final stages of demolition; no doubt to be replaced by yet another concrete monstrosity.

Crossing the river we went along Welsh Back to the Llandogger Trow. This very popular and rather trendy pub still has its 17 th century carved panelling but is rather soulless. A reasonable Speckled Hen was on hand pump. Our visit was enlivened by the arrival of a coach load of Japanese tourists for their lunch in “a typical English pub”.

Next stop was the “Royal Navy Volunteer”, just up the street past the Old Vic theatre.

We felt duty bound to sample all these delights. It’s a dirty job but ………etc!

This somewhat delayed our progress so we hurried round the corner to Colston Street and Wickwars “White Lion” This one room local has all the Wickwar range; their new light, hoppy “Long John Silver was particularly enjoyed.

From there it was but a Short step round the corner to Small Street, the commercial centre of the city where the famous Bronze trading tables known as “nails” are situated. Hence the saying “paid on the nail”.

Nearby is the “Commercial Rooms”, a spectacularly restored Wetherspoons, converted from a gentlemen’s club during the 1990s. Lit by a central cupola the restored fittings include a 19th century wind gauge; essential to the traders and merchants of the time and the varnished boards showing past club presidents. The pumps indicated that Kelham Island “Pale Rider” was “coming shortly”. Enquiries revealed that shortly meant about 20 minutes so in the meantime Orkney “Dark Island” was lovely! It was worth the wait for one of my all time favourites; the zingy, hoppy but 5.2% ale was in great condition.

After this there was just time for a final “Gem” in the Kings Head before a (very) brisk walk got us back to Temple Meads just in time for the very crowded 1649 train home. We didn’t have time for several more favourites which provides a perfect excuse for a return visit! A thoroughly enjoyable day much recommended for an outing. 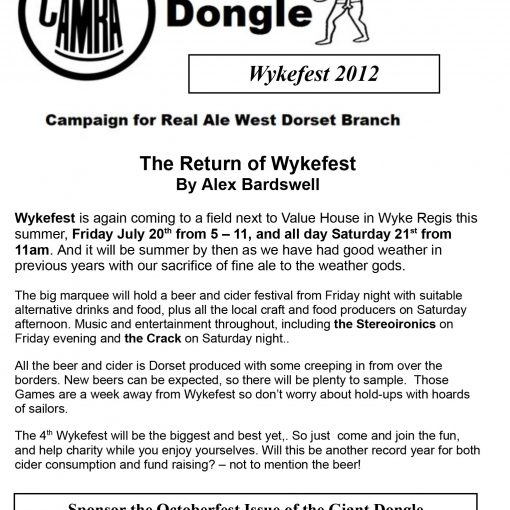 We’re pleased to announce the Wykefest issue of Giant Dongle! Festival details on back page (Page 24)

After winning the Beer of festival award last October, a beer tasting event in Dorchester was chosen as the venue for presenting […] 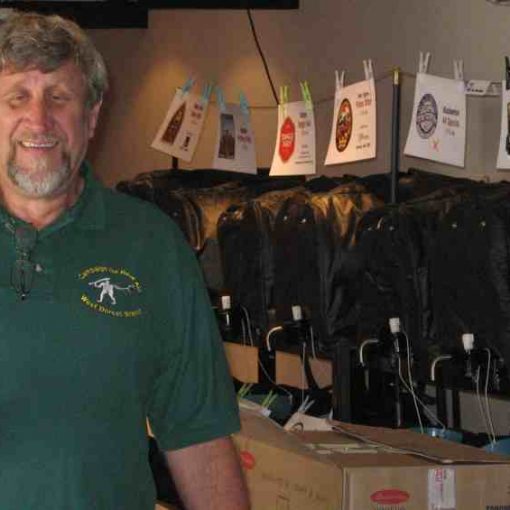 Simon gives another report and took these photos of a visit to this weekend’s Blandford Beer Festival. BLANDFORD BEER FESTIVAL 4 – 7 MAY […] 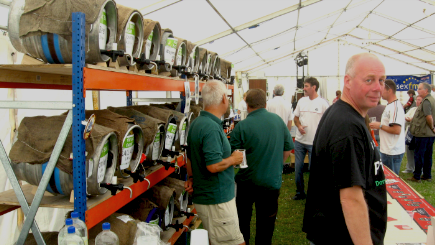 A CAMRA team worked hard over the last few weeks to provide a bar at this new festival. On the day the weather […]