Beerex in the Corn Exchange had a very successful year. After being hit by a snowstorm in 2009, all the regular visitors were back in force – tickets sold out about two weeks before the event. The Nags Head in Lyme Regis was awarded West Dorset CAMRA’s Pub of The Year award during the festival. Over 1200 people attended the four sessions, making some welcome cash for local charities.

The Nag’s Head Inn free house in Silver Street, Lyme Regis has been named as Pub of the Year by the West Dorset branch of the Campaign for Real Ale [CAMRA.] Members of the West Dorset Branch- ranging from Lyme Regis to Lulworth and from Portland to Sherborne- make nominations and a judging panel then goes round to assess the top-ranked nominees.

The pub now goes forward to the CAMRA Wessex Regional Pub of the Year competition, ranged against nine other branch Pubs of the Year from Hampshire, Wiltshire, the Isle of Wight and the Channel Islands.

Robin and Debbie Hamon have owned the Nag’s Head- just a mile from the Devon frontier- for 14 years and kept a pub in Guernsey for six years before that. Born on the tiny Channel Island of Sark, Robin Hamon was originally a fishermen. Debbie Hamon is a local girl, born in Lyme Regis.

The Nag’s Head Inn stocks many of the tasty Otter beers, brewed at Luppitt, near Honiton, including Otter Claus- the popular Christmas ale- Otter Bitter and Otter Ale. Among other real ales available might be Butcombe Blond from the Mendips or Fullers ESB from London. Darts is a popular sport at the Nag’s Head- as eight teams operate from the pub.

“The Nags Head is a fine example of an English pub,” comments West Dorset CAMRA Chairman David Harris. “it has maintained a high standard of real ales and a warm welcome for everyone over many years. It is very much a locals pub – its position tucked away from the town centre makes it a little harder for the casual visitor, but it is well worth the effort. It is great for us in West Dorset CAMRA to be able to recognise the efforts of Robin and Debbie by making this award.” 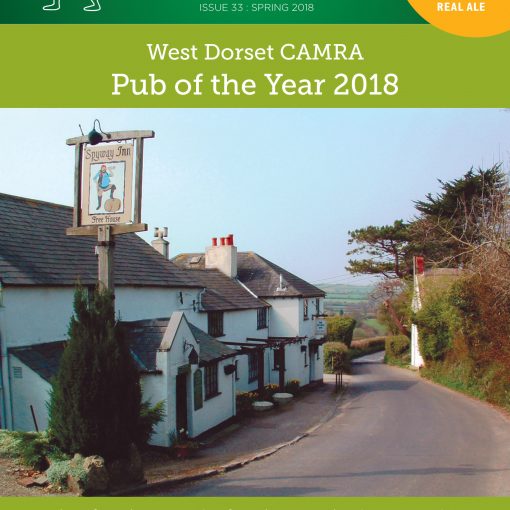 Featuring: Pub of the Year 2018; Updates from the West; Cyprus Beer Quest. Lots of other good reads as well.

In addition to this WhatPub information and because we also have breweries in our area providing services, Bruce Mead has been working […]

The Trooper Inn at Stourton Caundle is having a beer festival over the Holiday Weekend – Starts 6.30pm Friday – 20 Real […]