Branch “Weekend Away” – Last weekend’s trip to the Black Country breweries (and some pubs!) reported by Simon Palmer.

Friday 6th March saw the annual branch weekend which this year was to the Black Country.

After a very early start and negotiating the black ice at Stags Folly a packed mini bus trundled (an apt word given the 62mph governor fitted) northward into ever improving weather.

10 o’clock saw us arriving at our first destination:- The Windsor Castle, home of Sadlers Ales in Stourbridge. Having enjoyed a livener from the very impressive row of nine pumps on the bar, Chris the brewer led the tour of the 10 barrel plant. Sadlers was originally started in about 1900 by his great, great grandfather and Chris restarted the operation in 2004. It was pleasing to see that he does his own bottling via a cask hung from the ceiling allowing gravity feed and hand crowning and labelling; a full days work!

Next we joined the queue of thirsty locals awaiting opening time at The Vine, a gem of an unspoilt pre-war house also home to Bathams brewery.

After enjoying the best bitter and their terrific traditional mild in the maze of small rooms and passageways it was time to head for the Olde Swan in nearby Dudley.

The tour of the brewery housed in outbuildings was conducted by a very formally clad gentleman who revealed that he was shortly due at his other job of crematorium organist!

We then enjoyed lunch and I can truthfully say that their traditional faggots were the best I have ever tasted.

The next visit in a packed itinerary was the Black Country Brewery in nearby Lower Gornal. Housed at the back of the Old Bull in a tower brewery dating from 1834 the coal fired furnaces are still to be seen although the process is now fuelled by gas.

The Sarah Hughes brewery in the Beacon Hotel was our final call of the day (via a short visit to the GBG listed Jolly Crispin). The Beacon is a treasure; featuring a central bar area with serving hatches into the tap room and snug. The brewery is housed in a classic Victorian tower brewery retaining many of the original features. Their 6% Dark Ruby is truly glorious and one of my all time favourites! A weary group now headed for our accommodation: the very comfortable Red Lion in Bobbington where we all enjoyed a great dinner before retiring. A nice touch was the CAMRA literature and bottle of Dorothy Goodbody’s Stout in each room.

Saturday morning saw Rich B in the driving seat and a slight wobble in the GPS (Gabe’s Positioning System). But it was nice countryside and no hardship to cover the same road in both directions on our way to the Enville Brewery.

We were met in the yard by Jerry Hedges a director and after some refreshment from the racking shed he outlined the painful process of turning a moribund business into a lively concern by the injection of some eye watering amounts of cash by the new management team in 2003.

This ensured the security of the popular honey ale. After sampling their new ginger beer we were guided round the plant housed in a listed Victorian barn where the amount of ongoing restoration was very evident.

They had embraced the whirlpool system of removing the remains of malt and yeast from the brew and it was explained that this part of the plant had been purchased second hand from New Zealand. Initial teething problems were cured by reversing the blades to allow for the shift to the northern hemisphere!!

After a very comprehensive tour and a sample of some “green” bitter it was time to head off to the Kinver Brewery. This proved to be a total contrast being a 5 barrel plant housed in a small industrial unit and started by Dave Kelly and Ian Davies, real ale enthusiasts who financed the operation with the help of redundancy cheques!

They had just heard that their bitter had won beer of the festival at the Walsall beer festival so we were only too happy to help them celebrate while viewing the plant.

Ian and his wife then joined us for lunch at the nearby Vine Inn which is located next to a lock on the Staffordshire and Shropshire canal.

We now wended our way over the border into Worcestershire to visit Hobsons at Cleobury Mortimer.

This proved to be yet another contrast as the brewery consists of both a five and forty five barrel plant housed in a converted sawmill. This visit was a last minute substitution so we are very grateful to the brewer who showed us round. The building also housed a modern bottling plant and chilled wharehousing.

Saturday evening was spent in Bridgenorth where a special steam weekend on the preserved Severn Valley Railway meant that a visit to the GBG listed station buffet involved a very atmospheric evening surrounded by a host of “gricers” enjoying offerings from Hobsons and Bathams. After a curry we retired to the Red Lion for a good nights sleep before the trek home.

Huge thanks are due to Rich Gabe for the organisation and driving, Rich B and Andy Follett for taking their turn behind the wheel and Rick from the Raddle for paying for the fuel.

In the past the competition would have got underway with the AGM. Russ Ware, our competition organiser says “I’m open for nominations […] 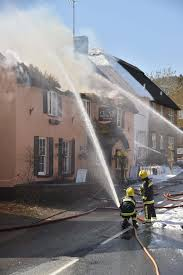 The Clock House in Chideock suffered a major fire last week. The building was gutted and the A35 closed to allow the […]