Simons recollections of a great day out …

Members of Portland Coastguard C Watch Beer Club (and CAMRA members) Nigel Robson, Phil Chappell and Simon Palmer paid a visit to the GBBF on Wednesday 8th. Arriving at Earls Court at 1230 we were all impressed by the organisation of such a huge event. Volunteer stewards guided us into the “Members with pre paid tickets” turnstile and we were soon at the glass counter. These were available in 1, 1/2 and the popular 1/3 pint sizes. The larger glasses were lined so that any of these amounts could be sampled.

Once inside we were well and truly spoilt for choice!

We first headed for the Scotland and Northern England sections and enjoyed Harvistoun “Bitter and Twisted”, Highland “Orkney Scapa Special” and Jennings “Cock a Hoop” amongst others. A first for me was the Northern Ireland offerings and I particularly enjoyed the light, hoppy “Solstice” from White Water Brewery in County Down.

There was plenty of local representation and Giles at DBC had both “Jurassic” and “Chesil” available while the new Yeovil Brewery was offering “Summerset”. Hall and Woodhouse had one of the most impressive brewery stands complete with a thatched cottage, dry stone walling, red phone box and (plastic) cow!

We fully tested the catering arrangements; everything from Bangers and Mash, Japanese, Thai, Indian, Chinese, Pizzas and vegetarian options were available.

The Continental section featured ales and pilsners from all over Europe and I enjoyed a Belgian wheat beer (whose name escapes me – the details were getting a little hazy by then!)

I was very pleased to bump into Brian Gallery. Those with (very) long memories will remember him brewing at Devenish in Weymouth. I last saw him when we were both brewery guides at Eldridge Pope some 10 years ago. He is now brewing at Hall and Woodhouse and was manning their bar at the festival.

Overall a very enjoyable day although being staged in such a huge “concrete shed” maybe somewhat lacking in atmoshere. This was more than made up for by the very friendly volunteers and good natured punters; it was especially pleasing to see so many young ladies obviously enjoying their ale.

Red Triangle Cricket Club are running a Cider Festival at the George Inn from 25thAugust over the Bank Holiday weekend. They expect […]

The Pavilion is changing hands and the new leasholder has confirmed to us that 4th and 5th October are reserved for Octoberfest. […]

Tony Egerton has been working through our WhatPub entries to keep them up-to-date with the latest information we have.  He sends this […] 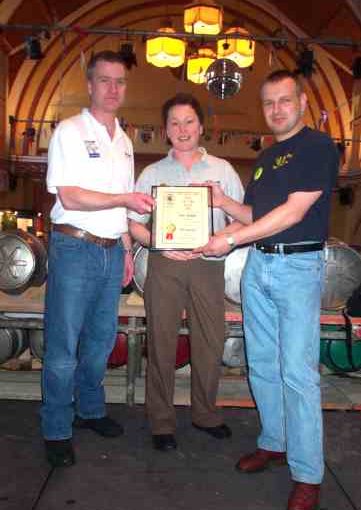 The winner of the local branch competition for CAMRA pub of the year was announced at Dorchester Beerex, and a certificate was […]