The Spyway Inn, the popular free house in Askerswell, has been named as the Campaign for Real Ale’s West Dorset Pub of the Year!  The West Dorset 2011 Pub of the Year certificate was presented by CAMRA’s Rich Gabe at the Dorchester Beer Festival to licensees Kevin, Tim and Vivien Wilkes. They have developed the family-run inn since 2003.

The Spyway Inn, the popular free house in Askerswell, has been named as the Campaign for Real Ale’s West Dorset Pub of the Year- judged by local real ale drinkers as the best among 263 public houses in the area. The Spyway is one of very few in Dorset to serve real ale by gravity- direct from the cask.

The West Dorset 2011 Pub of the Year certificate was presented by CAMRA’s Rich Gabe at the Dorchester Beer Festival to licensees Kevin, Tim and Vivien Wilkes. They have developed the family-run inn since 2003.

The Spyway now goes into the Regional Pub of the Year competition, against ten other pubs from East Dorset, Hampshire, Wiltshire, the Isle of Wight and the Channel Islands.

Vivien and Kevin Wilkes did briefly run a pub in Worcestershire, but son Tim was a newspaper advertisement designer. Looking for a new career and a move south, they saw an advert for The Spyway and at once fell in love with the country inn. “We love living here, the Dorset people are great and it’s a splendid place to live,” says Tim Wilkes.

The building dates from at least 1705, when it was a house with a blacksmith’s shop next door. It became a pub in 1845 and when the forge closed in 1905, that was incorporated into the public house. Some original flagstones are still in the entrance lobby and behind the bar.

The name is thought to come from being where the smuggler Isaac Gulliver would watch for the revenue men coming up the road, towards his farm further up Eggardon Hill. Spyway is a hamlet on the western edge of the village of Askerswell, four miles east of Bridport.

Otter Bitter and Otter Ale are served at the Spyway, real ales direct from the casks. Brewed near Honiton in East Devon, the two Otter ales are slowly gaining popularity in West Dorset. Patrick McCaig of Otter Brewery comments: “We are delighted for Tim and his family at The Spyway for winning the CAMRA West Dorset Pub of the Year. The attention that Tim has paid to the quality of cask ale dispense is commendable and a great example to others who pride themselves on their beer quality. Otter are delighted to have been part of that process and wish them all the best in the Regional finals.”

“The Spyway Inn is in an idyllic country location,” says West Dorset CAMRA Chairman Dave Harris. “It’s not on any main road, nor is it very close to town. Visitors are made to feel very welcome and given clear information on which gravity dispensed ales are available. On all our visits during the year we have been impressed with the consistent quality and condition of the real ale being served.”

The Spyway has attained AA four-star status for their ensuite bedrooms, popular with walkers. Part of the garden is a popular location for campers. They serve lunches and dinners every day, making good use of local ingredients.

“We were overwhelmed when we heard about our winning the Pub of the Year award,” said the Wilkes family. “We always strived to win the top pub award and now need to maintain the consistency. It’s good for our customers too, they give us tremendous support.”

A micro-brewery is being installed at the Dolphin, in Park Street Weymouth.  The Dolphin have sent us this information: “The Dolphin has decided […] 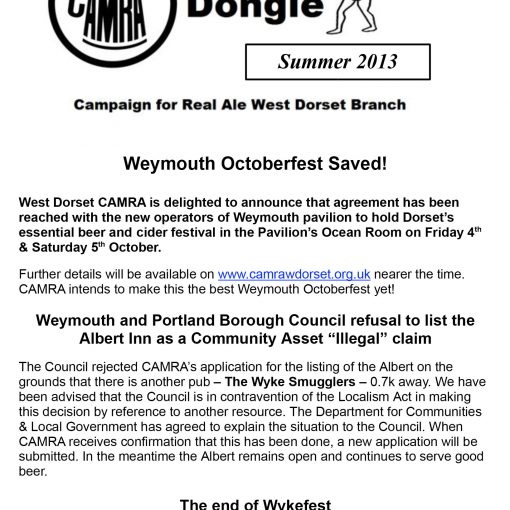 The 14th issue of our Newsletter just launched during the hottest weekend this year. This issue confirms the news about the Pavilion and […] 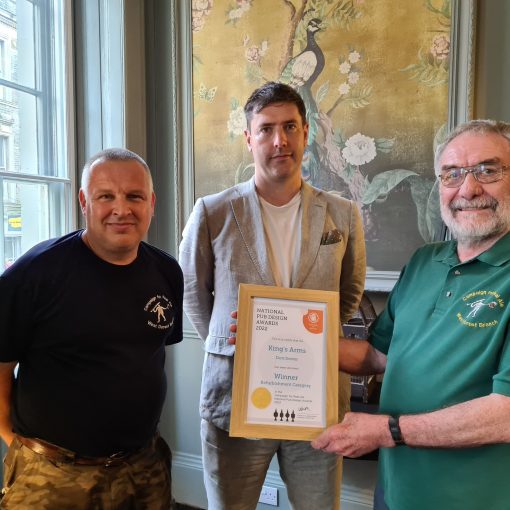 On Wednesday we presented the The King’s Arms, Dorchester with their certificate for winning CAMRA’s Pub Design Awards for Refurbishment. Presenting the […]

It is with extreme sadness that organisers of the 33rd Dorchester Beerex; West Dorset Campaign for Real Ale (CAMRA) and Dorchester Casterbridge […]